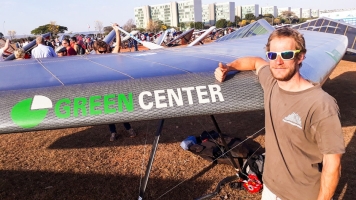 GREEN Center sponsors a new world champion in Hand Gliding 21. 8. 2017 GREEN Center sponsors Petr Beneš, the winner of the Hand Gliding World Championship, that took place in Brazil this year. After 9 racing days and 9 tasks in a distance of 80 to 160 km, Petr won gold medal in the so-called XC cross-country flying. Pilots have to pass the route using rising air currents. The key elements to win were the fastest time and reaching the given destinations. The points achieved each day were then added up. Petr Beneš has been doing great from the very beginning of the race and gradually made his way up to the first place. Among the teams, the Czechs finished second right after Italians.
GREEN Center congratulates Peter and other representatives!