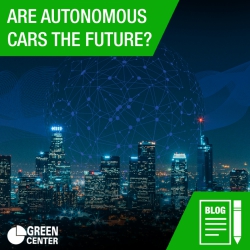 Are autonomous cars the future? Our visit at Future City Tech 2022 We have been invited to the Future City Tech 2022 conference by Jan Rakušan, Senior Mentor of PowerHUB – the company which organized the whole event. We asked Veleslav Dvořák, Head of Sales for the Czech Republic at GREEN Center, about interesting things he saw and tried out.

Did something strike you "right at the door"?
I was impressed by the fact that this wasn't just a local event. At least from a European standpoint, there was a relatively large international attendance, which automatically makes such an event more appealing.

What made the companies interesting?
A lot of startups took part, which is always a plus for me. They often tackle problems from a progressive and an innovative point of view – in any area or business. They look for solutions where other companies are no longer looking, because they feel like they've been there before and found a dead end. In many cases, these young companies can find loopholes that nobody else sees. This way of thinking is inspirational to me.

In addition to that, most exhibitors presented practical demonstrations of their products. And that's always great – ideally when you can touch and try out the products.

Would you highlight any particular product or service?
The one that got the most attention was definitely an autonomous electric car used to transport visitors around the expo. I'd say, for most people, it was their very first experience with a completely autonomous car. The only person in the whole process was an operator with a tablet – but he wasn't moving the car – he was there just in case of an emergency. The vehicle had no problem maneuvering through intensive pedestrian traffic, and would even turn itself around at the end of the route.

The car was driving on a footway though – don't you think people would be afraid to get into a car without a driver on an actual road?
I can't speak for everyone – but considering the maximal speed of these vehicles is normally around 30 kilometers per hour, which is like a fast bike ride, I'd say it shouldn't be a problem on short routes. Personally, I can imagine such a car taking me, for example, from the office campus to the bus stop.

Have you seen any more examples of an "autonomous future"?
One startup brought an autonomous drink vending machine. That to me is a completely new concept – the idea that this car drives itself around the grounds of a music festival, for example.

Furthermore, I found out that you can use this particular car's chassis to build just about anything. Looking at the problematics of, let's say, parcel shipping, I can imagine such a car stopping in front of my house, so that I can pick up my package at a convenient time. It's definitely better than the delivery driver calling me at 9 AM, surprised that I'm not at home, but at work.

Overall, I'd say cargo transport could become fairly common in the near future, because such vehicles don't have direct responsibility for human lives. When people get used to these cars driving on the road and when they see that they don't fall into the first ditch, perhaps the fear associated with autonomous cars will slowly dissolve. 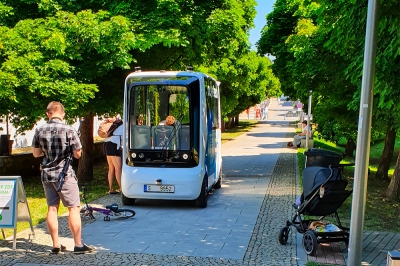 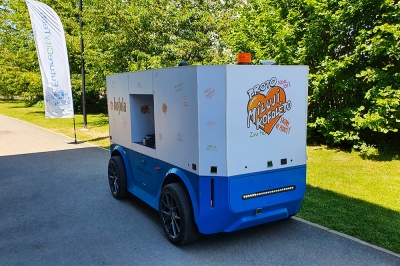